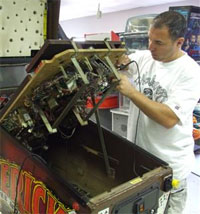 Chris Pyrgolios has been around amusement machines since the age of six, when his family purchased the famous Jimmy's Amusements in Carlisle Street in Balaclava in 1970.

Living upstairs from Jimmy's meant that he spent his entire childhood in the amusement centre and witnessed first-hand the advancement of technology in the industry. He watched as old bingo machines progressed from elecromechanical units into solid state pinballs. He still fondly remembers playing the very first table top arcade "PONG" the day it arrived.

At the age of 13 Chris developed a need to know how things work, with a particular fascination in electronics. He began building electronic projects including AM radios and robotic kits. He started dabbling inside the arcade and pinball machines at Jimmy's.

After completing year 11 at Oakleigh Tech, he began his first Electronics Course in 1982. This progressed to a second Digital Electronics course in 1983. He took a year off in 1984 to travel, then in 1985 completed the Computer Field Service course, finishing in the top five in the class in the process.

On the last day of class students were informed that, in 1982, 1400 students sat for the entrance exam. The top 120 students were selected from those 1400. By the final day in 1985 only thirteen students had completed the courses.

Upon leaving University he landed his first job with Barson computers as a road and in-house tech maintaining the BBC, Acorn and Apricot computers. A year later scored the contract for one year maintaining BBC computer networks in 25 schools around Victoria. His next job was with Gtech as the board technician, maintaining Tattersalls machines (that to this day are still found in Tattslotto agencies).

Chris re-entered the amusement industry by working with A.Hankin & Co for three months, learning the ropes. Then he started his own company, operating and servicing arcade equipment in various locations around Victoria. He eventually progressed and runs 120 machines in a dozen sites--including at one stage Jimmy's Amusements in Balaclava.

Since then he has worked for Bumper Action Amusements three times over the last 20 years as their technician, and currently holds a contract to take care of the road service and revenue sharing locations.